This is probably the easiest one for people to understand and see. Those crazy jet exhaust lines that you see in the sky, like giant grid patterns over cities….thats them. Here we look at the difference between “chemtrails” vs “contrails,” and take a look at who all is involved in creating them. The purpose of why they create them is a rabbit hole in and of itself that we will also touch on. Scroll down and lets talk about jet chemtrails.

So you’ve seen the trails, and heard your conspiracy theorist friends yack about them…but what ARE they really?? Well, it seems that since the late 1990’s, the military jets have been combining fuel additives to their fuel tanks, and when they want to, they can flip a switch and utilize these additives to change their airplane exhaust trail. A normal exhaust trail from a military jet is called a “condensation trail,” because the hot exhaust condensates into gas upon arrival in the cold dry air. Condensation trails(aka ‘contrails’) then disappear within seconds, leaving the sky blue.

Chemical trails on the other hand leave a distinct exhaust trail in the sky that lingers for 30 minutes to an hour as it grows and expands in size.

Take a look at the difference between a chemtrail and  a contrail: 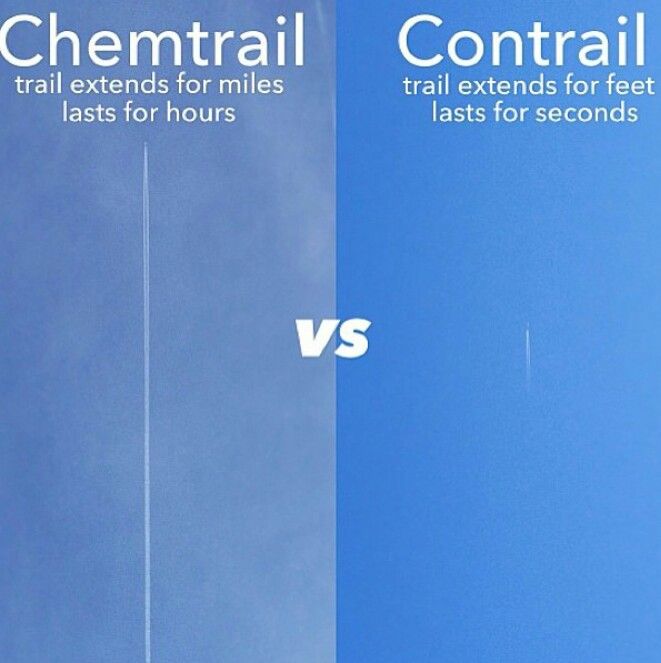 What scares me is the official explanation for Chemtrails…that they are just lingering contrails. Then how come planes at the same altitudes can leave a lingering trail, and another won’t? And we are talking a 30 second time difference, same sky. I’ll post more videos, but it is happening in my own backyard. See the time lapse video I took with my iphone looking out my backyard deck:

Yes, you are seeing clouds being created literally out of thin air, and patterns of waves on the cloud structure itself. HAARP is a very powerful energy wave that can energize the ionosphere. You are seeing it in action. And no, they are not doing this all the way from Alaska…that facility is simply a front for the official program. There are multiple offshore islands and other undisclosed government radio towers in residential areas that are all connected to their grid.  In fact, a chemtrail pilot recently spoke out on the whole thing. Check this out: CHEMTRAIL PILOT SPEAKS OUT ABOUT CHEMICALS IN SPRAY & HAARP

And then you have the governments official explanation of chemtrails as simply ‘lingering contrails’ that don’t contain any chemicals. Check out the screen capture I took below from NOAA(National Oceanic & Atmospheric Association – basically the government branch in control of weather) website. Here is the link if you want to see it for yourself:

Explanation of chemtrails from NOAA.gov

Notice the difference in the two photos. The chemtrail exhaust(artificial) lingers in the air while the contrail    exhaust(normal) dissipates. What advantage would an exhaust that stays in the air have? And what exactly is IN that exhaust?

That is photographic evidence. Now lets look at some video evidence to see what it looks like in action:

THE INTERIOR OF A CHEMTRAIL PLANE. THINK OF THE COSTS OF THIS PROGRAM!

Here is another video from a FedEx airplane carrying freight, coming very close to these military jets, covertly laying chemtrails. In fact, the radio control tower had no record of them on radar because the planes have no call number. See for yourself the video from the cockpit:

Chemtrails are not covered very much in Mass Media, since media is a controlled platform. Here is one news channel in California that did a piece that is worth watching. Pay attention to what the Air Force’s official statement is on chemtrails…its comical:

So now that you know the difference between Contrails & Chemtrails, lets look at what they DO with the chemtrails once they are laid in the sky in grids. It starts with a government program called HAARP(High-Altitude Auroral Research Program), based in Alaska. Start here(CLICK LINK): HAARP